I’ve never written a review of an album.  I can’t imagine why that is given my vast knowledge and immense adoration of so many varieties of music.  In fact, I was so passionate about the song “Pursuit of Happiness” from Nuno Bettencourt’s Schizophonic album that the word “pursuit” is one of my two tattoos.  And yet, my website holds multiple book reviews but none for any band or collection of songs…until now.

I didn’t choose to write something about Rare Bird Alert because of my on-line persona’s fictitious “crush” on Steve Martin.  It wasn’t something spawned of spending a few hours laughing with Steep Canyon Rangers’ fiddle player Nicky Sanders.  I wanted to write this because, after listening to the album a few times, I felt I understood it as a concept.  It didn’t appear to be a random selection of pieces chaotically strewn together.  Instead the songs complemented each other as if woven carefully by a lovely, old Southern woman quilting on her porch.  In my opinion that intricate thread which slips in and out of each song is love.

“Women Like To Slow Dance” illustrates a romantic love starting off right while “Jubilation Day is a love gone horrifyingly wrong.   So many songs and styles of love that part of me is certain I must be wrong in my observation…but there it is.  That is what I believe.  And I’m not a girl who sees love everywhere.

While this is essentially a Bluegrass band, I view them as the musical equivalent of what I do with my poetry.  I am a poet for people who don’t know they like poetry.  Given the opportunity, Steve Martin & Steep Canyon Rangers could easily convert an audience who claims they would never enjoy the music of the banjo, mandolin or fiddle.  In an attempt to keep this review as true to my own perspective as possible, I have not read the liner notes since purchasing the album.  While these perceptions may be far from what Mr. Martin & Steep Canyon Rangers intended for their songs,  I find that art is the most enjoyable when a multitude of interpretations can be extracted.  I rarely base my thoughts on the intentions of others…even the author. 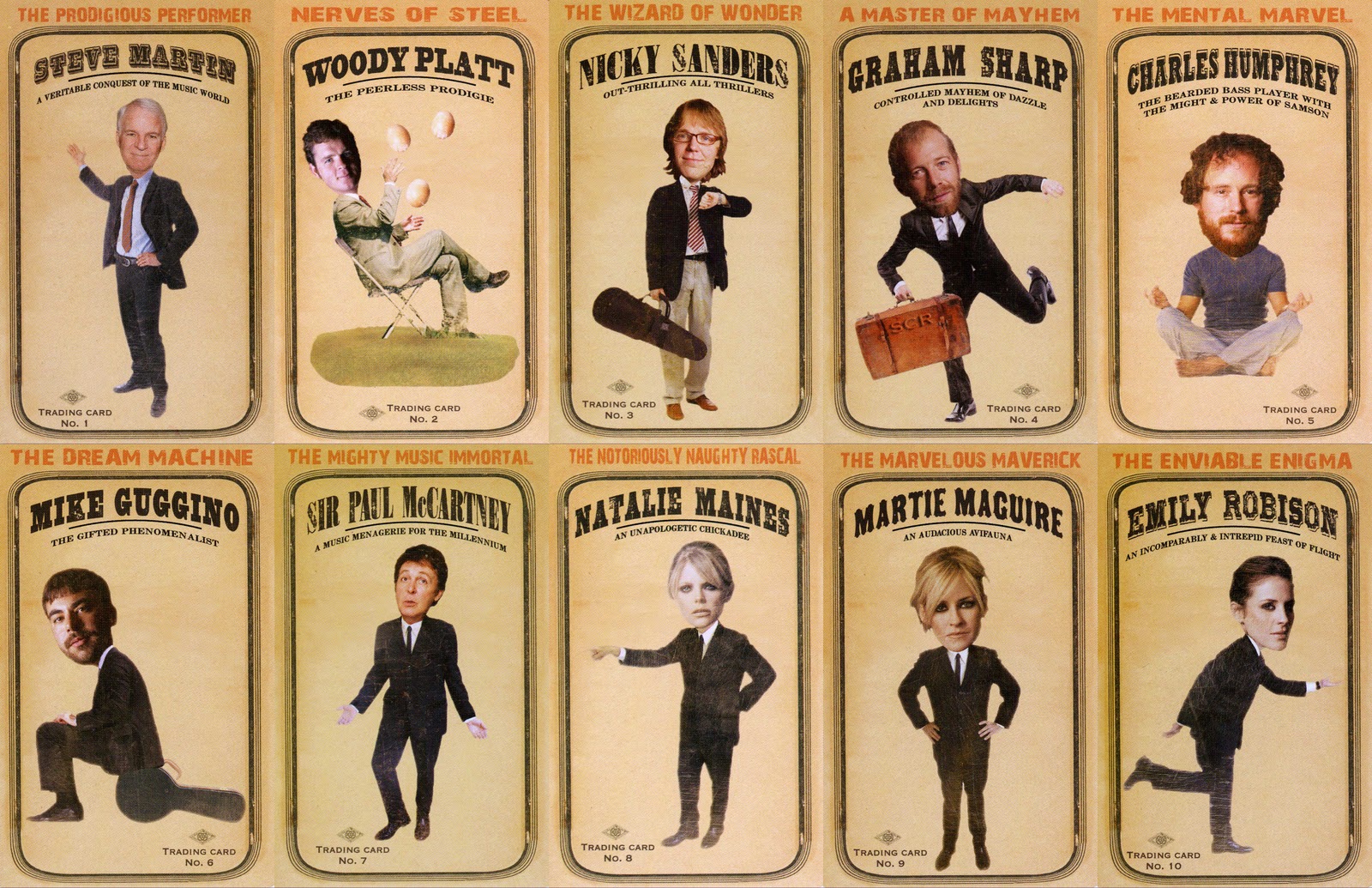 Because I rarely buy cds, I went all out with this purchase.  I was fortunate enough to find the deluxe edition at an Asheville, NC business called Harvest Records.  The notable upgrade being “Rare Bird Alert trading cards”.  Why would I want ten, tiny biographies about the performers?  Well, that’s just the kind of girl I am.  Among my prized possessions are the original, intact cutouts for Sgt. Pepper and a play booklet which accompanies my Jesus Christ Superstar double vinyl album.  And so, the extra money spent for the trading cards was handed over without pause.  Aside from that kitschy addition, the cd and vinyl recordings are precisely the same.  Thirteen tracks with music and lyrics written predominantly by Mr. Martin.

Knowing myself, my presumption was that I would embrace the humorous songs, which I had already heard, more than the serious or instrumental ones.  I assumed I would metaphorically wear out the tracks to “King Tut” and “Atheists Don’t Have No Songs”.  I was elated to discover that this was far from the truth.  It was so far in fact, the truth would have needed to drive all night if it wanted to slap my original perception in the face for its ignorant assumption.

Steve Martin’s next movie, The Big Year, is about competitive bird watching.  Being present for a “rare bird alert” is a considered a sizable coup among “twitchers”; those bird watchers who are willing to go to any length imaginable to see an uncommon species.  One might say, or at least I would, that such people must “love” birds.

The song, “Rare Bird Alert”, is instrumental, but in my mind it was the epic chase scene in the movie.  The stops and starts of the hectic and sometimes ridiculous antics of a desperate group of people all trying to get to “there” first.  A lively melody which brings me a smile no matter how many times I’ve listened to it.  Steve Martin is said to be an exceptionally intelligent man.  Given his popularity, I would guess that just about any collection of musicians would have knocked their own mother to the ground at the chance to play in a band with him.  I don’t believe for a moment that it was merely serendipity that landed Steep Canyon Rangers this gig.  This song is proof of that.  These are immeasurably accomplished musicians who can change my mood in a few bars with their proficiency.  I think Mr. Martin made a wise and educated decision and I’ve been assured that no mothers were harmed in the process.

There’s a line in the movie Primary Colors where the wife of the president-elect says, “The longest answer to a five-word question I’ve ever gotten is the answer to ‘do you do much fly-fishing?’”  I did grow up on the Fox River in Illinois and yes, I’ve spent quite a few hours fishing, but I’m not the sort of girl who would ever write about fishing.  Fortunately, Steve Martin is that sort of person.  “Yellow-Backed Fly” is his Melvillian tale of “the one that got away”.   Lyrically, it’s a simple story of a simple love.  A man who likes to fish and, while he longs for the day when he catches the massive fish, he’s content with his efforts to outwit his cunning prey.  Aside from the captivating melody, Woody Platt’s vocals are what really puts this song over the top for me.  Mr. Platt’s voice is irresistibly easy to listen to.  I’m an admirer of Steep Canyon Rangers work prior to their pairing with Steve Martin.  Their harmonies are so smoothly intertwined on their recordings that I was certain they would not be as breathtakingly precise when I saw them live.  Once again I was wrong.  Upon writing this I wonder if I should just stop listening to that little voice in my head.  She is, after all, incorrect so much of the time.

“Best Love” is quite an astute title for the third track on the album.  Sung by Sir Paul McCartney, it is effortlessly beautiful.  It isn’t a myriad of cleverly woven platitudes, rather, it’s a relationship broken down to the most basic level.  Casual conversations and times of understood silence.  The knowing that all which is easy and that which is difficult are equally important to meshing the lives of two people in love.  A love song so uncomplicated it could have been written by Sir Paul himself.

Track five on the album speaks to a feeling we all know well.  That comfortable relationship which we know we shouldn’t be in, for whatever reason, but  can’t find the right moment to actually break up.  “Go Away, Stop, Turn Around, Come Back”…oh yes, I know it well. This is certainly a funny love song with enough truisms to make it viable to just about any listener, and yet, it’s still terribly sweet.  Nicky Sanders’ fiddle brings a little more depth to several of the pieces on this album, this is one of those. The instrumental portions of the song offer a glimpse into the deeper love that still holds these two people together.  A comfort which may be a crutch keeping them from moving forward into other relationships…but is still a comfort just the same.

“More Bad Weather On The Way” is almost entirely “lyric-free” aside from the repetition of the title.  One would assume that it is a sad or slow song, but not me, I’ve learned my lesson about assumptions.  When I hear this effervescent tune I imagine that the people are overjoyed at the prospect of the impending weather system.  My brain puts them snuggled up in a cabin somewhere with plenty of supplies and a roaring fireplace.  Two people who are quite content at the prospect of this excuse not to venture outside their haven.

For some reason, still unknown to me, I’ve never really listened to The Dixie Chicks aside from their hit song, “Goodbye Earl”.  After hearing their lush vocals and eloquent phrasing on “You”, I’ve decided I need to become more knowledgeable about their body of work.  “You” tells another love story seldom heard in songs.  Being in a “Best Love” relationship but still, sometimes, thinking back to the old love.  The love that, for whatever the reason, got away.  Yes, it may have been for the best.  Sure, you’re better off now.  But still…sometimes…you think back on all the reasons you were with that last love in the first place.  I’m certain that I’ve felt that way before and that I will feel that way again.  Just as I am certain that whether this song is based on actual events or is merely plucked from a stray thought in the air, Mr. Martin understands this emotional seesaw too.  Lyrics, music, instruments and vocals have combined to illustrate this particular brand of love perfectly.

The last song I’m going to talk about is another one of my favorites.  “The Great Remember” is perhaps the most truly difficult type of song to write and yet possibly also the easiest.  I say this from my own experiences of writing poetry and not music. This is a piece about a love who has passed away.  I’ve written such a multitude of poems which have been read at funerals that I’d rather not count them.  As an artist, writing is a funnel for my grief.  I have sat and composed poetry which took me only minutes and once spent sixteen hours at a Perkin’s restaurant to complete something for the tragic death of a dear and sweet friend.  In every case the words came out of me like a river of ink onto the page.  There is no dam which can ever halt that which needs to be said.

“The Great Remember” is not a mournful tune just as my poems were not subdued and somber.  To remember someone is to call forth all that made them a part of you.  This song does not bring to mind a funeral, it conjures the images of a wake.  The inability to suppress a smile when an iconic anecdote is retold.  Foibles, habits, the good times had amongst friends or family.  This is what I hear when this instrumental comes through my speakers.  Happy chatter of loved ones “remembering” the loveliness of the person who is now gone.  And in the background, dancing and twisting through the joyous remember is the melancholy sound of the fiddle.  That tear which everyone is holding back and letting go finally….with the laughter of their love.

And so, I leave you with this final thought.  No matter what your “pursuit of happiness” may be or where it may lie, this album is an ideal soundtrack to accompany you on your journey.

Notes….My apologies for not highlighting each of the musicians on the album or reviewing all of the songs.  Each person who contributed their particular skill was essential to making Rare Bird Alert the treasure that it is.  I hope that my writing will convince you to find out more about this album, Mr. Martin’s previous album “The Crow” and the many musical efforts of Steep Canyon Rangers.  The Rangers are a phenomenal band both live and in the studio.