I know I’m a little late in officially thanking everyone for the Mountain Xpress Best of WNC Poet. My apologies for that. I am so incredibly honored to have been named for the third year in a row. I honestly thought the email I received from the Mountain Xpress was an error. Since the lovely Glenis Redmond hasn’t lived in WNC for over 2 years, it’s my hope that being second will help me get more gigs and media attention for my book, Roasting Questions… it’s a really good book and I’m terribly proud of it.

So, the reason I was late in thanking you… I’m not a very web savvy girl. A few days before the Best of WNC announcement, I ran updates on my site and it crashed. My stomach was in knots. My recent trip to Illinois for a friend’s funeral had left me completely broke and I never expect anyone to work for free. I thought I might get a little advice from my online community, so I took my situation to Twitter and Facebook. I was so touched by the response. Several people offered to help me resurrect my site. One guy in particular, Dairen Wilcox of Malus Labs, really wanted to assist me. I’ve known Dairen online for several years and helped him promote different things, so I felt like an exchange would be okay. He not only got my site up and running, but also met with me to discuss more that he wanted to do. The result is my brand new, seriously sexy new website. I am absolutely in love with his design and so grateful for all his help.

I also recently sat down with my favorite photographer, Rodney Smith of Tempus Fugit Design. Rodney first noticed me when I posted my “Rapture Tips” and I have been an enormous fan of his work through my theater friends who have done photo shoots with him. I started modeling when I was 19 and I was blown away by the pictures we did together for the “Magical Wardrobe of Barbie Angell” project. In fact, Rodney’s photos are the only ones I’m using for publicity now.

Anyway, I digest… I’ve only consumed coffee today, but I’m digesting it nonetheless… Rodney and I will be collaborating on two more projects. One is the long-awaited Truism endeavor and the other will be based on my “Rapture Tips.” While neither will be ready for my mini-book tour in Illinois this Fall, I’m hoping that one will be ready for the holidays. 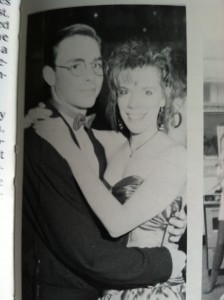 … and i had really big hair. Me, at prom, with Mike Stitt.

So far I’ve only scheduled two gigs for my trip to Illinois in October. One will be on Friday, October 4th, 7-11pm at Cantigny Post VFW 367 in Joliet. I’ll be performing with Jim Chuporak, doing poetry between his sets. Believe it or not, Jim and I used to sing together when I was in Mooseheart and he was a houseparent there. Yep, we sang “Take Me Home, Country Roads” at about 30 Moose lodges in 1990… and I also sang “The Rose” at a bunch of them too. And, if you’re shocked by that, you’ll fall out of your chair when I tell you that I was also a cheerleader.

good… and now, back to my story.

The other show I have set up in Illinois will be at Mooseheart. I’ll be performing for some of the students there and donating a book to their library. I spent four years in “The Child City” and I cannot imagine what my life would be like if I hadn’t lived there. A portion of the proceeds from my children’s poetry book, Roasting Questions, will be donated directly to the school and it has always been a dream of mine to go back and do a show for the kids.

I am still looking for more gigs in Illinois. The little man and I will be in the Western suburbs, Chicago, Brookfield, Bourbonnais and Bloomington-Normal. If you know of anyplace where I might perform, please email me at barbieangell@gmail.com. We will be returning to my home state in the Spring, so I’ll be looking at scheduling shows then as well.

Spring of 2014 will also be bringing more books from me. I am working with an independent publisher on a few limited release ebooks of my adult poetry, as well as some new childrens’ projects.

This is all a lot for me to be doing. Not having an agent or a publicist makes it even more difficult, but I feel like I need to do whatever I can to keep going with my writing. I want to make my son proud. I want to show him that he can be everything that he wants to be, as long as he tries to do his very best. An obscure comedian named Steve Martin once said, “Be so good they can’t ignore you.”… thank you to everyone who hasn’t been ignoring me.